To understand Donald Trump and the Trump presidency you have to know who Roy Cohn (1927-1986) was. If one grasps Cohn’s public persona, behavior and world view one attains a window through which we can peek into and comprehend Donald Trump’s behavior.

Roy Cohn was a New Yorker who was utterly brilliant and utterly bellicose, utterly engaging and utterly devious, utterly immoral and utterly dynamic. He graduated with a law degree from Columbia University at the age of nineteen in 1946 (that is how smart he was) and quickly found himself working for the Federal government.

He was an avid anti-communist and as a prosecutor with the United States Department of Justice played a central role during the famous trial of Julius & Ethel Rosenberg in 1951. In turn, the Rosenberg trial brought him fame and prominence and his combative style caught the eye of U.S. Senator Joseph McCarthy. McCarthy was impressed and appointed Cohn to the Senate Permanent Subcommittee on Investigations (which McCarthy chaired) and which carried out both his anti-communist and anti-gay investigations in branches of the U.S. government.

By 1954 and during the hearings pitting the United States Army against Senator Joe McCarthy, Ray Cohn was his chief council.

The 1954 U.S. Army hearings were a disgrace for McCarthy and ended in ignominy for Cohn who resigned and entered private practice in New York. He left Washington D.C. but he left knowing how it worked and who were its gate-keepers.

By then his brilliance as an advocate, his combative style and his relentless energy in pursuit of his goals were well known – bringing him rich, powerful and famous clients; some respectable many not-so-respectable.

An old maxim states that a person chooses the type of lawyer, doctor and accountant that suits his personality. Ray Cohn basically attracted wealthy and influential clients who either had serious legal problems or wanted to bend the law to the breaking point (and maybe a bit beyond) in pursuit of their interests. Cohn was more than willing to oblige for he viewed laws, rules and regulations, norms and customs as, let us say, things to be ignored.

As his private practice grew so did his power, along with his elite networking, both social and professional. He became one of the most feared lawyers of New York City and a political fixer of unparallel abilities up and down the East Coast, from Boston to Baltimore and beyond throughout the 1960’s and 1970’s.

And fatefully, in 1973 the then 27-year old Donald Trump sought him out to be his lawyer. Trump was captivated by Cohn’s ruthlessness and rare skill sets and he became Trump’s mentor and council until 1985.

Trump came under the tutelage of Cohn and became his most avid student. Cohn shaped, honed and gave Trump the modus operandi that we see on display the last four years. Lie and attack.  Disparage and attack. Disinform and attack. Deny and attack. Create chaos and intimidate.  Never back down and hit back harder and lower than your opponent. Both the style and tone are vintage Cohn.

But even more importantly he made Trump who he is by introducing him to New York’s elite social and political circles who in turn opened all the right doors for him. Without Cohn’s guiding hand, Trump’s professional trajectory would have reached a much lower altitude. To this day, Donald Trump misses Roy Cohn – his abilities, mental acuity and energy, but there was only one Roy Marcus Cohn.

As both a lawyer and a political operative Cohn took no prisoners, the same style of engagement that so often characterizes the 45th president of the United States. In the end Cohn’s past and his machinations caught up with him and he died in disgrace, disbarred from the New York Bar Association in 1986.

Some wonder if his prize student, who was impeached (but not convicted) will have the same dishonorable ending as his teacher. 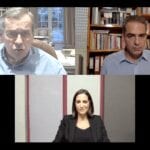 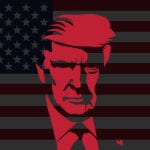 Covid-19 Is a Fissile Material

In physics the point of critical mass is, according to Britannica, “the minimum amount of fissile material needed to achieve a self-sustaining chain reaction under stated conditions.” In sociology the term is used to describe a social phenomenon that reaches the “threshold of its limits” – when enough people within a group “alter their opinions leading to drastic change in their behaviour and actions”.
Written by Alex Tallas 18 Ιουνίου 20209 Σεπτεμβρίου 2020